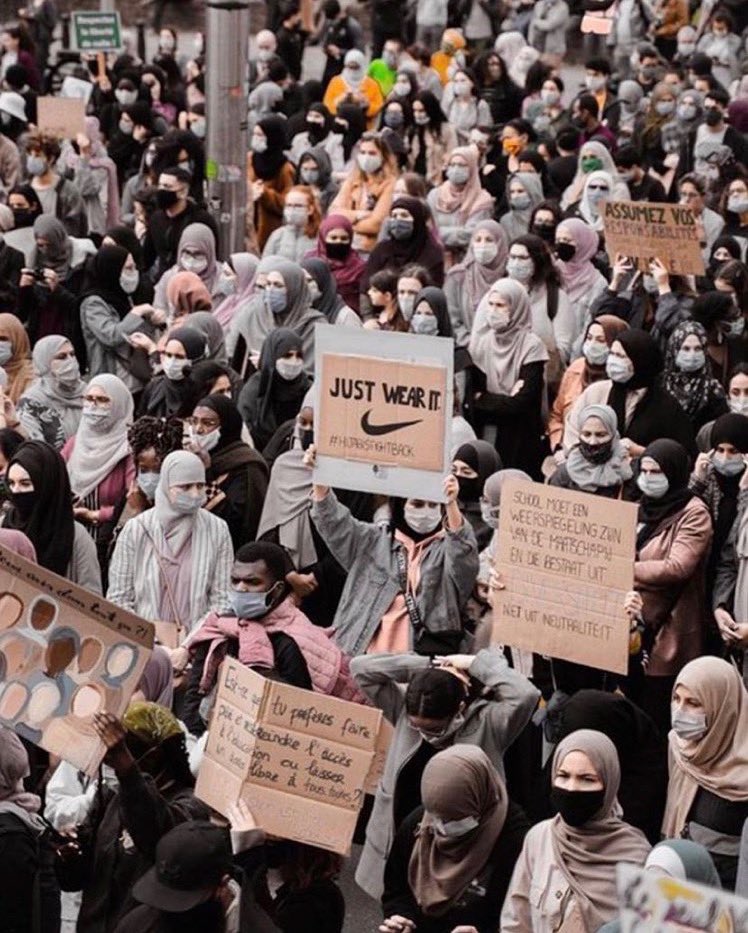 A petition to overrule the Hijab ban in Belgium universities after courts banned the wearing of Hijab and other religious items of clothing, has been started.

With just under 124,000 signature and 25,000 more needed to gain the courts attention- hundreds of people have pledged to end religious discrimination in higher education.

On 4th June 2020, the Belgian Constitutional Court banned the wearing of Hijabs and other religious symbols in higher education.

The Hijab has become a contentious issue in many European countries with the rise of right-wing politics and anti-Islamic and immigrant ideology.

Protests took place all over Belgium on the 5th of July last year, when campaign groups such as ‘Hijabi’s Fight Back’ marched the streets, urging the courts to overturn their decision.

The situation in Belgium is the most recent uprising linked to the Hijab Ban in a long list of controversial laws that have come into place across Europe over the last ten years.

After the tragic events of 9/11, countries have started placing bans on the Hijab to prevent the rise of extremism.

The European Court of Justice placed a ruling allowing companies and workplaces to implement a neutral dress code.

This ruling was prompted by an event in 2006 after an employee was fired, for choosing to wear a scarf three years into her work for the company G4S.

Many Muslim women are utterly baffled as to how the government consider this as liberation from oppression.

Wearing the Hijab is a choice that empowers women in many ways. It becomes a big part of their identity; having to go against their belief to pursue higher education may not be worth it for some women- depriving them of seeking an education, simply because they choose to cover their hair.

Hafsa Lodi, 29, New York-born, currently living in Dubai, has been covering fashion in the Middle East for the past decade.

She released her debut non-fiction book ‘Modesty- A Fashion paradox’ in 2020.

It explores the causes, controversies and key players of the global modest fashion movement. She has featured in Teen Vogue, Harper’s Bazaar (US and Arabia), Cosmo UK, Emirates Woman and more.

Hafsa said: “Among young, Muslim women, Hijab is becoming political as an assertion of modest fashion, as a liberating choice and rejection against Western societal ideals that measure a woman’s merit by her beauty, attractiveness and “sex appeal.

“It’s also becoming a political marker of identity, as a woman of Muslim faith, in a post 9/11 environment that led to Islamophobia and negative images of Islam in the media.

“Dressing modestly and stylishly can show that you’re Muslim and still ‘modern’ – and that covering your hair does not make you ‘alien,’ ‘intimidating’ or ‘othered’.”

The narrative surrounding Hijab has taken away its authentic beauty; with the ideals and constant misrepresentative portrayal of Muslims and Hijab-wearing girls in the media.

“Westerners are often fed a very biased narrative about the Muslim world – images that led the US to invade Afghanistan showed violence, terrorism and war, alongside pictures of local Afghan women, who were supposedly forcibly covered up, and somewhat “jailed” inside of their burqas.

“That’s why ‘the liberation of Muslim women’ proved to be such a pressing ‘excuse’ for the American government to wage war.

“For non-Muslims who aren’t well-travelled or educated about the diversity of different cultures and religions, the Hijab has mistakenly become a symbol for “foreign” terror, oppression and lack of women’s rights.”

In the world of social media, it’s becoming easier for minority groups to take control over their stories and narratives by speaking up and showing the world the reality that’s hidden behind the ‘versions’ of themselves portrayed in the media.

“We’re witnessing more and more Hijabi women in the limelight owning their narratives.

“The influx of modest fashion bloggers who cover their hair on social media is just one example of how this demographic is using public platforms to debunk stereotypes and disprove ignorant narratives about Muslim women.

“We have Leah Vernon, a plus-sized, African American, Hijabi model, who talks about diversity, modesty and narrow interpretations of Hijab on her Instagram page.

“We have Mariah Idrissi who uses her platform to promote inclusivity, diversity and sustainability and has become an icon and role model for young Muslim women.

“Then there’s Abdiya Iman, who recently launched the first-ever Modest Fitness Week – a virtual event that brought together female Muslim trainers, coaches and activewear designers for a female-only fitness celebration.

“Social media has proven to be an invaluable tool for anyone wanting to speak their truth and control their story and representation, and Muslim women across the globe are utilizing it in diverse ways.”

The concept of a Hijab ban in the UK has been discussed heavily alongside the Niqab (full-face veil).

Because of its diversity, democracy and freedom, it seems highly unlikely that the UK will follow in the steps of its neighbours.